I have collected everything from pebbles to seashells to stamps to books, to sundry other stuff including carefully smoothed out candy wrappers over the years. I thought of them as hobbies, but all of them eventually disappeared – either given away, lost or simply discarded. But one collection has not only remained intact, but has also grown and continues to grow. And though it sort of began in childhood, the physical collection began in my 20s when it turned into a full-fledged hobby. Do hobbies teach one life lessons? They do!

The interest was sown in me by my elder sister. Others told stories while feeding a child or putting her to sleep, but she sang songs – from Hindi films of those days with her own stories woven around them. The songs grew on me and I learnt to differentiate the voices of the singers and associating them with the stories she told. The love grew and in my teens, the lyrics caught my imagination I began collecting those — hastily scribbled in my notebook from the songs played on radio. I couldn’t afford a gramophone (remember the contraption that had a fine needle rotating over the grooves of those black shiny discs?) and just had a transistor radio. It was during this time perhaps that a mere collection became a passionate hobby.

When cassettes and cassette recorders came along, my collection began in earnest. The first cassettes came typically from my sister who copied some of my favourite songs for me. Finally I became the proud owner of a Two-in-One (a big thing in those days), and began recording songs from the radio myself on blank cassettes. Suffice to say that the collection grew and finally when my sister gave away all her cassettes, guess who got the lion’s share? My precious collection also contains the stories of Ramayana and Mahabharata my father had recorded for his grandchildren.

As collections go, it was a mixed one. Some cassettes played perfectly with the audio quality being very good. Some had the mukhda missing, some had waxing and waning audio, others had terrible static. The reason for these ‘flaws’ was that they were recorded mostly from Radio Ceylon (Sri Lanka Broadcasting Corporation) and the method she used to record them.

Sitting hunched over the tape recorder, late into nights, often in darkness so as to not disturb others, she painstakingly not just recorded songs but also classified them into groups: songs from one film, songs of a particular music director/lyricist/singer, songs with two versions, mazedar songs and so on. She would keep several cassettes ready and just as the announcer said the name of the movie/singer/music director/lyricist’s name, she would pop the relevant cassette into the recorder and begin recording. Now you know why some songs missed their mukhdas and others began before the announcer finished talking! 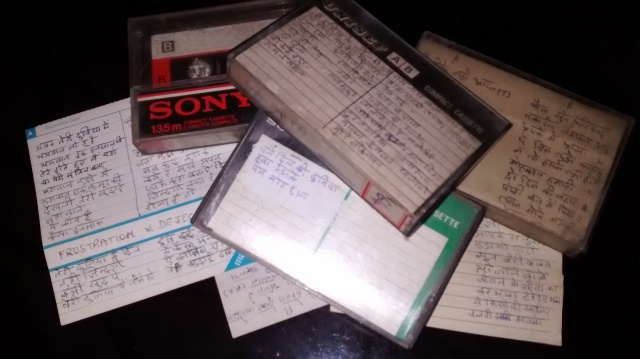 Yellowed by age, but still a treasure

She would cut out pictures of the artistes and paste them on the cassette cover and give them titles like ‘Matchless Mukesh’, or ‘Lovable Lata’. She also catalogued them and made an inlay cover for every cassette. Unfortunately as she readily shared her collection, the inlay covers got interchanged, sometimes even got lost. I have saved them, if only as a reminder of the love and dedication of my sister.

It was a job to lug the huge carton of cassettes with over 300 cassettes, on our innumerable house/city shifts; but carry them I did. However, over the years, not just lugging the tapes but also playing them became an ordeal as cassette recorders became obsolete and the cassettes themselves began deteriorating and even snapping or snagging. I lost so many of them like this and the precious songs they held.

I had to convert them to MP3 format but conversion software were time consuming and complicated. Then some years ago I found a music system that ripped the contents of the cassette directly into MP3 format and saved it on a pen drive, and voila! I am happy to say that today they are all saved in the cloud, for posterity! I never tried to improve their audio quality through editing, since I wanted those little ‘flaws’ to provide me the connect I needed.

The handwritten captions are precious

Having ripped all of them, I couldn’t bring myself to throw the cassettes away. They had been part of my life for years. For months I kept them under the bed but when we left Delhi, I hardened my heart and gave them away. I still have some cassettes with me as keepsake.

Now, for the lessons learnt from this hobby: I used to be a very choosy listener. The songs had to have good lyrics and/or my favourite singers. I never went beyond Lata, Rafi (I wrote about him here), Talat, Kishore, Geeta Dutt and Manna Dey. Though my sister’s collection included both Hindustani and Carnatic classical music, other language songs than Hindi, ghazals and folk music, and she tried getting me interested in them, I adamantly picked up only my favourite songs. It was only in my 40s that I began listening to other singers and appreciating them, tentatively at first and then with increasing interest and fascination.

I learnt to appreciate the light-hearted style of G.M.Durrani, the emotion in Surendra’s voice, the sweetness of Lalita Deulkar’s singing, the innocence in Madhubala Jhaveri’s voice. I now understood why my father had seen the Ashok Kumar movie Kismet 12 times – just to listen to the songs, for I fell in love with them myself! What wealth of music I would have missed had I had a closed mind!

This voyage of discovery has taught me to keep an open mind and not discard or condemn anything without giving an ear, or an eye or at least some thought to it.

I have discovered that being a collector is more enjoyable than being a connoisseur. As a collector my interest lies in discovering and adding forgotten melodies to my collection, appreciating some facet of the song in the bargain.  As a connoisseur, I would have ended up being limited in my appreciation and perhaps turned too critical.

There are those who are completely into music – knowledgeable about the various genres, singers and musicians themselves. Alas! I am not one of them. But then everyone can’t be an expert, can one? Though I love listening to all genres, my heart is in Hindi film music and I am not apologetic about it. So yes, my hobby has taught me to enjoy what I like without trying to justify or defend it.

And then one day, a small music group happened. Started by one of my school friends on FB, it is dedicated to old Hindi film songs, though we also post non-filmy and new songs to set themes. Some members post new songs, even the latest ones. Of course, I still don’t abide by the inane lyrics and lack of melody in most of the songs today — which are composed for a use-and-throw generation — but some of the songs shared by my friends have struck a chord and have found place in my precious collection.  I have learnt that sometimes things are beautiful when seen/heard through the eyes and ears of friends.

When I listen to the static-filled and sometimes incomplete songs from my collection, my thoughts go back all the way to the time when my sister sang to me as kid and then to the young woman who sat in the dark and recorded them, and both images fill me with love. They are my precious memories wrapped in melody. Doesn’t that make it the best collection/hobby ever?

Do you have any collection? Do tell me about it, won’t you?

← The toothless smiles
Have you connected with yourself lately? →