There are some visitors we love and welcome, no matter if they drop in at odd times or come unannounced. And there are others we would like to avoid at all costs whether they come with or without an appointment. Death is one such visitor. We even avoid its mention, leave alone like being visited by it. It is macabre and ruthless, even in so called peaceful deaths because of the desolation and devastation it leaves behind.

Death is viewed differently by different religions. In Hinduism, it is believed to be a stage in the journey of the soul, which either gets ultimate salvation or is reborn again. Whether it attains salvation or is reborn depends upon the law of karma, by which the deeds in one’s present life determine a soul’s fate after the death of the body. There is the celestial book-keeper Chitragupta who keeps score of the good and bad karma of a soul and sends it on the next leg of the eternal journey — either to swarga (heaven) or Naraka (hell) — till the account of good and bad are even and the soul attains moksha (salvation and oneness with God).

But no matter what the religious interpretation or view of death, it is still viewed with dread and loathing.

Which is why Death personified by Markus Zusak in The Book Thief completely fascinated me. He is shown as not only having a heart, but also compassion. So before holding Death responsible for the loss of lives shouldn’t we take a look at humans who are the cause due to their bigotry and a craven need for military and economic supremacy? Death actually gets tired of ferrying human souls in such huge numbers especially from Nazi concentration camps and the battlefields across the globe during WWII. So much so that he is haunted by humans.

In an interview Zusak explains how the character of Death assumed the personality he did in the book. Having decided to tell the story of the Book Thief in the words of Death, he suddenly realised how macabre some of the dialogues sounded.  And that made him change him into a lively Death, to use an oxymoron. At the cost of sounding morbid, I would say that I found the character of Death almost likeable as portrayed in the book.

Just listen to him introduce himself:

I love the last statement. Zusak has effortlessly put across a huge philosophical truth. Death indeed is the result – of life. After all, everything that is born has to die sooner or later isn’t it?

Coming to the book, the story is set during WWII at the height of Hitler’s pogrom against the Jews and so there is much death and dying. In fact, it starts with death — of a little boy in the train when he and his sister are on their way to their foster home in Molching, a small town near Munich. That is the first time Death sees Liesel Meminger, the protagonist of the story. Also, it is Death that narrates the story of the book thief.

But if you think it only about death, you couldn’t be more mistaken. It is more about life in all its myriad hues portrayed in such a gentle manner. It is about the young Liesel Meminger, her life in her foster home with Hans and Rosa Hubermann, the love they share despite the hardships, her friendship with Rudy and Max, and of course, a lot of books. 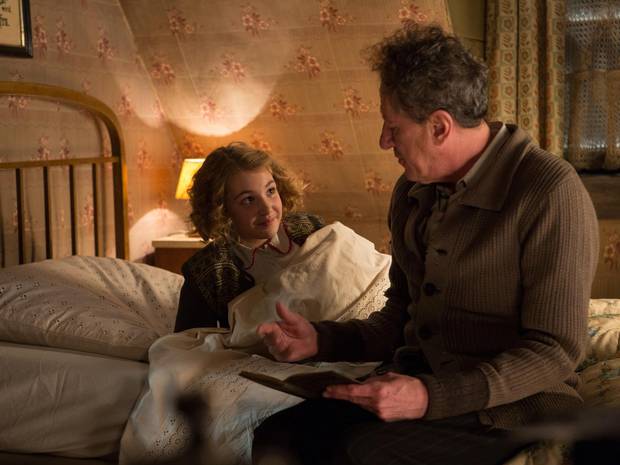 It is in the tiny foster home on Himmel Street that Liesel discovers the power of words with the help of her Papa, Hubermann — a gentle and compassionate accordionist. It all begins when she wakes up night after night with nightmares of her brother dying and her papa coming in to sit with her and read with her. Liesel learns the words by painting them on the wall of the basement sitting amidst paint tins and dust sheets. Soon the basement becomes her favourite place, for it is there that she finds joy of words and stories, first with her papa and then with Max.

Liesel discovers that words can both destroy and bring back to life. She uses them as a weapon to fight a hidden enemy, to fell the Fuhrer no less. She uses them to calm her terrified neighbours huddled in the basement during the air raids. She employs them to restore normalcy to the life of the distraught Mrs. Hotpafzel who has lost a son in the war. She uses them to bring back to life an almost dead Max, by reading to him day and night. And in the end, it is those very words that save her, as she pens her story – The Book Thief in the basement while the world above her comes to an end. It is this book that Death retrieves from a garbage truck and reads over and over before telling us her story.

The friendship between her and Rudy is beautifully portrayed. It is he who gives her the name Book Thief, for though they both steal food with a gang, it is books she loves stealing. For all her fights with him she also loves him, but never gets a chance to tell him how much. Her friendship with Max starts tentatively but is just as deep.

That is all I am going to say about the story.

This is one of those holocaust books for young adults that tells the story of the Germans, both the Nazis and the compassionate ones like Hans Hubermann and his wife Rosa, Rudy and the German soldier Walter, who is Max’s childhood friend and helps him hide. While the Jews were hounded, the Germans suffered too, though not in the same way as the former, but their suffering was no less than theirs. Driven by a maniacal leader, spied upon by the Gestapo and being forced to turn against long time neighbours and friends, living under strict rationing of food, it was not easy being compassionate, especially towards the Jews as the consequences of being discovered were terrible.

For the sake of comparison, we can take Anne Frank’s Diary since both have adolescent girls as protagonists. One a Jew in hiding and the other a German in a foster home hiding a Jew — both girls go through the pangs of adolescence and hardships. But that is all about the similarities. Anne Frank’s Diary is a true account narrated by the young girl, while The Book Thief covers a wider canvas chronicling political, economic, social and emotional upheavals of epic proportions.

At another level this is also about the outsiders. Liesel is the daughter of a Communist – the other hated word in Nazi Germany; Hans Hubermann, who refuses to join the Nazi Party, and is abandoned by his son for this reason, is another outsider; Rudy, is anything but a typical Hitler Youth — who tries to feed the marchers on the road to Dachau — could also be called an outsider.

For someone not directly involved in the story, Zusak, an Australian with German parents, has brought alive wartime Germany to the readers. His book has been influenced by the stories he heard from his parents who were children in Germany during the War. Two of the stories he heard from his mother especially moved him — of the Jews being marched through their street to Dachau and of a boy being flogged for giving a piece of bread to one of the marchers. Both incidents find place in the story albeit in different forms. Hans Hubermann is a painter just as Zusak’s father was.

The Book Thief is meant for young adults but still has snatches of horrifying images, though overt ones of death and suffering are not many. But that is something one has to expect in a book about Nazi atrocities and set during WWII. One image remains with me till today as Death muses about the Jews while watching the Germans huddled in a cellar during a raid:

The Germans in the basement were pitiable, surely, but at least they had a chance. That basement was not a washroom. They were not sent there for a shower.

Over 600 pages and yet not one boring page. It speaks of the mastery of Zusak in telling the most compelling story that I have read this year. I especially loved the way the story goes back and forth, with the outcome of some event disclosed several chapters earlier. It is great for those like me, who find suspense of any kind hard to take 🙂  The characterisation is impeccable, even the minor ones like Rudy’s mother is brought alive through his pen.

I am not sure I would be watching the movie. The images that the book has conjured for me are so deeply etched in my mind, I don’t want to discover any different that might shatter them.

I had finished reading The Book Thief  around the time of the Peshawar school carnage and I couldn’t help wondering what thoughts would have passed through the mind of Death as he carried the souls of the little children in his arms. Yes, he always carries them in his arms — the souls of adults he slings over his shoulders….

Have you read The Book Thief or watched the movie?