Close encounters of the river kind

Like our ancestors who settled on riverbanks, I too have lived in cities situated on the banks of some famous rivers – though not for the same reasons as our ancestors 🙂

My very early years were spent in Secunderabad and Hyderabad, where the Musi river, a tributary of the Krishna river flows and divides the twin cities. There are other water bodies too but I have faint recollections of only the Husain Sagar lake, and none whatsoever of Musi. The lake was not as jazzed up as it is now with the Buddha statue and all.

The next city we moved to was Vijayawada, where river Krishna flows. I have vivid memories of this river as the entire family went by foot to its banks every Amavasya day. We all took a holy dip and father did the rituals for our ancestors. And one of the most enchanting sights for the six-year-old in me was the train trundling along the bridge over it, as I excitedly felt the ground vibrate under my feet. We bathed pretty close to the bridge in those days. But the Prakasam barrage that loomed further ahead gave me the shivers and I would studiously avoid looking in that direction. I wonder what it was about it that made me so scared! 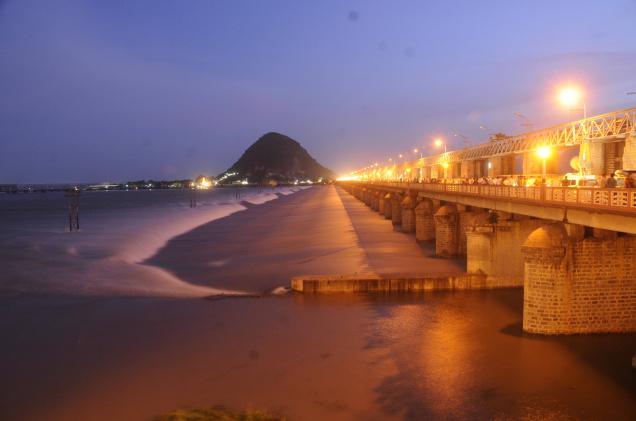 Prakasam Barrage on the Krishna: Is there anything scary here, folks?

Nagpur had two rivers – the Nag and Kanhan. There were many lakes too but being far away, any outing was reserved for the visits by cousins from other cities or the odd school trip. A canal of the Nag river ran behind our school and I could see it from the window next to my desk in my fifth standard classroom. It was no more than a sewage canal though and had earned the sobriquet of Nag nala.

When we moved to Tiruchirapalli during my high school, I was excited about being on the banks of the beautiful Kaveri. I was fascinated by the ‘garland’ she made around Srirangam with her tributary Kollidam. The impressive Kallanai dam did not scare me as the Prakasam barrage once had 🙂 It was beautiful. Again, we lived too far away and visits were limited to a few times a year with my parents. My older siblings had either got married or moved away and it was not as much fun as the monthly visits to Krishna had been during my childhood.

The only city I lived in, which had the sea in addition to lakes and the odd river was/is Mumbai .

In Delhi, I commuted along the Yamuna to and from work every day. She didn’t evoke much feeling in me for, sadly she was more like a stream – and a dirty one at that and was more in the news for the filth and pollutants she was receptacle to. 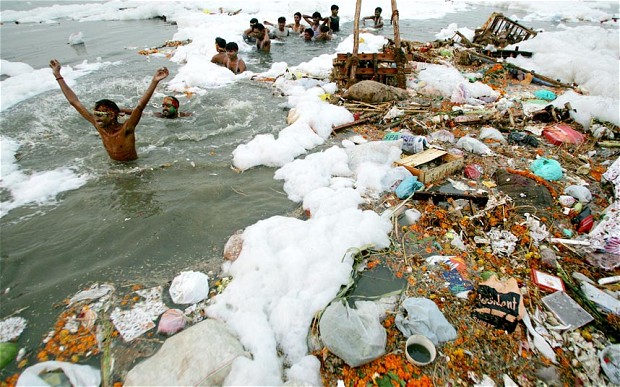 That is not foam, but chemical pollutants

The Narmada in Jabalpur with her Dhuandhar waterfalls is impressive and beautiful. The frothy, tumbling waters as she flows over the rocks in the valleys, can also be as still as glass when she flows between the famous marble rocks. Make no mistake, she is someone to be admired and looked at with awe and reverence.

All mighty and beautiful rivers — but there was little emotional connect with any of them. One river which I had felt really close to and wanted to ‘get to know better‘ was Kaveri. If I had got to live closer to her, I might have too. Who knows?

However, it wasn’t till I set my eyes on the Ganga that I fell in love with a river for the first time in my life. Pardon me for being mushy, but when I touched the waters, I felt directly connected to Lord Shiva. Legend has it that He contained her torrential flow in his locks lest the earth was inundated as she fell from the heavens. (Legends of Ganga.)

The feeling perhaps also had something to do with growing older. Just the flowing water of the river had enchanted me when I had been younger. With age, more profound feelings and philosophical metaphors took over. I began comparing the ceaseless flow to the way time and life flowed on; I looked at the  way water flowed regardless of the hurdles in its way, winding and leaping over them and wanted to be that way – not bowing down to life’s pressures; I was overcome by humility and shame when I saw the way the river cleansed not just dirty bodies but also tarnished souls, even at the cost of dirtying herself. Isn’t that how we treat our mothers and women, expecting them to forever be the givers without a murmur?  Yes, it was the symbolism of the river that moved me the most followed closely by its spirituality.

A lone diya serenely floating down the Ganga

About a decade ago, I had stayed at Rishikesh, alone for six weeks, when Ganga had become my soulmate. She had helped me sort my muddled thoughts and find peace. I have been there many times since and on a recent trip, I felt a change in her mood. Last year’s flood fury has left indelible marks on the landscape and the river itself. I was perhaps imagining it, but I felt her infinite sadness — of having washed away so many lives in her unabated fury. After all, which mother would like to see her children suffer? But how much can even a mother take? Perhaps she had just snapped. And during one especially muggy night, I thought I heard and saw the many wandering souls and was shaken to the core.

This time, we made a day trip to Devprayag, the last of the five prayags (confluence of one more rivers) where Alaknanda merges with various rivers descending from Gangotri. It is here that she meets Bhagirathi to finally become Ganga and flow down to the plains. (Panch Prayag). While Alaknanda is a deeper shade of greenish blue and is more sedate as an elder sister is wont to be, Bhagirathi is lighter in colour, more boisterous and noisy.

The other prayags higher above must be even more spectacular. I lack the felicity of expression to describe the awesome sight and so will desist and let the picture speak for itself. All I can say is that it is a joyous sight, much like sisters meeting after a prolonged separation.

The town of Devprayag itself is quaint, built into the mountain on both sides of the river and connected by a road bridge and a pedestrian suspension bridge. We walked down the narrow winding lanes and saw houses with ornate traditional doors and windows. Higher up though, two and three storeyed structures are rapidly coming up. Trash and sewage of course spill over the slopes…

Mountains and rivers are held sacred by not just Hindus but people of other religions too. Tourism, whether pleasure tourism or temple tourism is fine only so long as the tourists respect the mountains and rivers — if not as sacred entities, at least as Mother Nature.  Littering is certainly not one of the ways of doing it. Wrappers, remains of meals, empty water and booze bottles….the sight of the last especially put me off.

Cleaning the Ganga and our other rivers  is a humongous task if not downright impossible unless we change our ways. Otherwise posts like this would be all that remain bringing up nostalgic memories.

← The Righteous Schoolboy — Sardar Vallabhbhai Patel
It’s all about relativity! →