‘Shall we go for a movie?’ asked my would-be L&M on the second occasion we went out after our engagement.

I nodded assent. He bought some chana and we munched as we watched the movie – an action movie, but I didn’t mind it. Then during our honeymoon, when I caught him looking up the movie listings in the paper, I was dismayed. Here I was waiting to explore the Garden City and beyond and here was my L&M ready to take refuge in a movie theatre!

Soon however, I realized that I had married a movie junkie. I liked movies, but to go for one every week and sometimes twice in a week, was a little too much, wouldn’t you agree? I tried to dissuade him on several occasions but it was a futile effort. He would behave like an addict who had been denied a shot – edgy, snarling and generally insufferable. And soon I gave up and slowly got hooked myself. Isn’t it always best to join ‘em, when you can’t beat ‘em?

In Tamil we have a saying that goes, ‘When you marry a ghost, you have to be prepared to haunt the tamarind tree,’ (ghosts are supposed to haunt the said trees). So I valiantly prepared to follow him to the movie halls — for better or worse.

One day he told me about his first movie ‘adventure.’ It was sometime during his early teens and he had gone to see Christopher Lee’s Dracula. To prove that he was not scared of any old vampire, he not only went alone but also to the late night show. While coming back home he had to pass a lonely stretch and the brave heart began pedaling hard to cross the stretch as quickly as possible. As he pedaled furiously he heard another cyclist behind him. All the scary scenes of the movie flitted before his eyes and he began pedaling hard, panting even harder. The cyclist behind him increased his pace and our hero heard him panting too.

Afraid to look back, his heart in his mouth he thought he would stop and let the other guy overtake him. But that fellow stopped too! And so began a race against all the imaginary vampires chasing him. On the verge of collapse he finally stopped at a well- lit square where some rikshaw-wallahs were preparing to sleep. Relieved to be among other humans, he picked up courage to look back. He saw the other cyclist. It was another boy like him — face white as sheet — who had been following my future L&M for company!

I am certain that that night the vampire had sunk its fangs into his tender neck, for till date he doesn’t miss a vampire movie, leave alone the Dracula!

Alas, I didn’t know of all this when I married him. And so come weekends we would prowl the cinema halls of Mumbai. Back in the 70s English movies were scarce but we saw every Hollywood movie that was released and when there were no new releases we saw them again and yet again. We saw the Laurence Olivier- Michael Caine movie Sleuth thrice! I must admit that it was worth the watch  it every time. We saw Hindi movies too – the blockbusters. He was partial to them as against ‘art movies’.

As for me, I had some wonderful movie experiences.

Watching the first show on the first day was a game for us. Living close to the erstwhile Strand cinema in Colaba, we managed to do that whenever a new film was released there. The ‘jugadu’ that he was, L&M had befriended the doorman who booked the best seats for us for a fee. But he couldn’t replicate the same thing elsewhere. So we ended up seeing ‘One flew over the cuckoo’s nest’ first-day-first-show sitting in the first row because the rest were all sold out! The crick in the neck I got looking up at Jack Nicholson and Will Sampson, the ‘Chief,’ was worth every frame, every dialogue of that great movie. 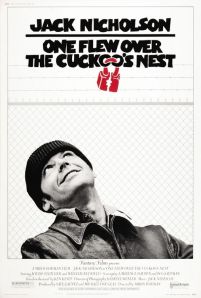 The other day when I saw Magiceye’s capture of the New Excelsior in Mumbai, I went back in time to the days when it was all spanking new with its wide angle screen — the first of its kind in India.

I was not too keen to see Mary Queen of Scots but the L&M cajoled me into going. You see, in addition to lapping up vampire movies, the L&M was/is a historical movie buff too.  But what a great experience it was watching that period movie on the huge screen! We saw The Last Emperor, Quo Vadis and Ben-hur – all in the same theatre later. I think he missed his vocation when he did Engineering. He would have made a swell historian.

I got used to the historical movies, action flicks and even some horror stuff, but I drew the line at James Bond movies. I mean, I could sit through a Race with the Devil or even a Streetfighter, but I didn’t want to go to one of the 007 capers. The L&M was a diehard fan of the genre and kept trying all ruses to get me to see one without any luck.

One Saturday morning he told me before leaving for work that we had to attend a wedding reception of his friend and to be ready by 5 PM. And so, I wore a party sari and got all dolled up. I don’t like any jewellery and so didn’t wear any other than my mangalsutra and a couple of bangles. Looking at this plain daughter-in-law going to attend a wedding without any extra gold on her, my shocked mother-in-law made me wear a necklace and heavy earrings.

‘Which friend is this?’ she asked me. It was then that I realized that the L&M had not told me his name. Was he a colleague? Maybe… So I told her that he was a colleague.

The L&M arrived promptly at 5 PM and changed. I asked him about this friend and he gave some vague reply and promptly changed the topic.

We got into the taxi and he told the driver the destination in a voice I couldn’t hear properly. Soon it stopped at Regal theatre, which usually screened James Bond movies.

He got down and paid the cabbie.

‘But this is a theatre!’ I sputtered. I had seen the poster by then: ‘Man with the golden gun,’ it said.

‘But you said we were going to a wedding!

‘Yes, this is too. Roger Moore’s wedding.’ He grinned in most boyishly, disarmingly  and above all, very nervously!! I was not in the mood to forgive him – no, not for deceiving me into watching a Bond movie, but for not telling me earlier. At least I would not have dressed up like a lit-up Christmas tree. And the necklace! Ugh.. I took it off once we went inside.

And suddenly he vanished to return a few minutes later with some popcorn. I think that was when the popcorn made it appearance on our movie dates.

What started off as an appeasement snack soon began devouring us. Like drug addicts, we would make a beeline to the snacks counter and stock up on the stuff. Sometimes it would be finished within a few minutes into the movie. Undaunted, he would march out again to get more.

By the time we moved to Delhi and discovered Priya and PVR, years later, it had become one of the main reasons for going to a movie. The brats took after their parents and gobbled up even more popcorn. Suffice to say that the bill for popcorn would be more than the cost of the tickets. I could swear that the boys and girls behind the counters rubbed their hands in glee when they spotted us. If you think that is stupid of us and that we could have got the best popcorn sitting at home, you need to be pitied. They are mutually compatible – popcorn by itself is just something to much on, but combined with a movie, it is an EXPERIENCE!  Try it before knocking it.

These days the L&M and I go to the morning shows to avoid the crowds. What’s more, snacks are discounted for these shows. Amongst all the coochie-cooing youngsters, we are often the oldest, not to speak of the largest consumers of popcorn.

The vampire-bitten L&M still loves his movies, but I am not so enthusiastic these days. So he lures me with promises of extra-large tubs of popcorn. Only, since I eat very slowly, he finishes his own and then mine too. He promptly brings a couple of more tubs – with the same result. But I have made my mind up. No more sharing if he wants me to come along.

This decision comes with a catch. He can watch a movie by himself if it comes to choosing between me and the movie. So ultimately I would be the loser – I won’t even get the one tub of popcorn I do now, if I don’t go along. What do you think I should do?

(Image at the top courtesy: Cartoonstock.com)

← Mirror, mirror, on the wall
These grapes are sour… →