A tale of two books

My two books for children have been published 15 years apart. Understandably therefore, my experiences while writing them have been completely different. While doing the first one, there was no Google, and email had just come to India. The Brats were young and enthusiastically participated in the effort, reading the stories and offering suggestions and most importantly, I was younger. How time has flown! I had dedicated the first one to the boys but the second one is dedicated to my little granddaughter — no, she is too young to read my stories but has given me the status of a grandmother, and therefore deserves the mention, doesn’t she?

I wanted to share the tale of two books with you all when Cybernag has just completed four years.

It was in the early 90s…I had quit full time work and decided to write for children. The boys were growing up and I had a ready source of material for umpteen stories for children.  It was a breeze, right? How wrong I was, came home when my stories were rejected left, right and centre. I gritted my teeth and wrote one final story, making my mind up to stop trying if that one got rejected too. I looked anxiously at the editor’s face a couple of days later, waiting to find out my fate as a budding children’s writer. I exhaled slowly as she smiled.

Many stories, features and anthologies of stories for children later, I decided to write a book. It was to be the childhood stories of eminent people and included scientists, statesmen and others from the world over. I didn’t want them to be boring biographies, but dramatised stories of their childhood, that brought out the child in them so that the children reading the stories could identify with them. There were no Indian books in this genre at that time. I spent hours at the libraries and made copious notes on the period, place, lifestyle, dress and such. Finally I wrote a sample chapter and made a proposal.

It was then time to find a publisher. There were many who published children’s books, but I set my mind on National Book Trust (NBT). Their books were good, the marketing network was widespread to reach the far corners of the country — not just the metros — and the books were translated into other Indian languages. Being subsidised, they were affordable to children even in small villages, where NBT organised book fairs sales of their books. What more could an author want? My proposal was accepted and I was called for a meeting. And one fine day, I marched into the NBT office with a copy of the proposal.  A cursory glance at the pages (I am sure it had been reviewed before I went) and then the question:

‘Why do you want to write about those who are no more? Why not about Indians who are still amidst us and doing great things? Won’t that be more interesting for our children?’ I was given a list of names. I was stunned.

‘Doesn’t that make it more challenging? I am sure you can do it.’  And the proposal was gently pushed back towards me with a smile.

Of course, I had met and interviewed big names for newspaper features, but a feature was more specific, with a question and answer format. This was different. The personalities would have to recall their childhood dreams, the disappointments and the joys of growing up; when they were vulnerable, innocent and looking forward to life; the influences that moulded them…

I’d like to think that my family was so confident of me to complete the job, that they didn’t think it necessary to show me any sympathy at my predicament. Instead, they were all excited. ‘Amma, could we come to meet them when you go?’ asked the Brats. I had no clue as to how to get their contact details and here they wanted to already meet them! The personalities were scattered all over the country. What was more, I wouldn’t be getting any advance to meet my expenses like travel and telephone bills. Remember, phones in the mid-90s had not yet become as cheap as they are today.  But the L&M dismissed that magnanimously and gave me the go-ahead.

The following weeks passed in a daze, trying to find eminent personalities who would agree to give me an interview to talk about their childhood. So began the slow process of contacting each one through snail mail. If I was lucky enough to get their phone numbers, I called – long distance. And then after several months, I had 12 personalities from the list given to me, who had agreed to meet and talk to me. There were artists, writers, scientists, judges, social workers and sportsmen and others from various walks of life among them. 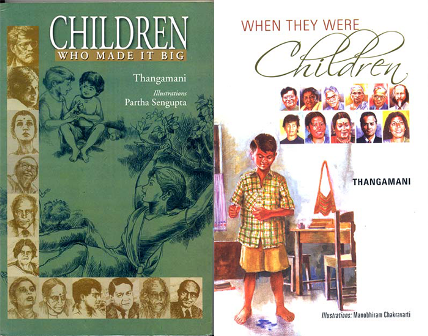 Armed with my notepad, pen and a pocket cassette recorder – in those days we still used those – off I went on my journey of discovery. It was both exciting and scary. These were great men and women who were at the pinnacle of their chosen field and would not tolerate a fool. I had done my homework – lots and lots of it. I had decided against a QA format, as this was to be more a walk down memory lane for them and I couldn’t fit it all in some questions except maybe ask them the names and places and a few open-ended questions to jog their memories. Didn’t they love reliving the memories as they went back in time!

Once the interviews were done, I sat down to transcribe, write and edit the stories and soon  discovered that while writing a biography is not easy, it gets tougher when one has to write only about the childhood of such high achievers and even more challenging when the target audience is children. I also had to keep in mind that it would be translated into other Indian languages. (I translated my first book into Tamil!) Doing the two books involved interacting with no less than 23 personalities. It was sometimes overwhelming, but was always a humbling experience.

…I was a tad unsure of myself when it came to Ruskin Bond. After all, he was an institution when it came to children’s writing and had written so much about his childhood in his stories. The fact that he agreed to do the interview itself was humbling. The boys clamoured to go along and so I took them. Sitting in his simple home in Mussoorie, Ruskin Bond spoke about his father’s influence in shaping his interest in writing and how his demise had devastated him. In the end, he gave an autographed story book to the younger one and a fountain pen to the elder one, much to his delight. I still cherish the handwritten letter he sent me in appreciation of his story, when the first book Children who made it Big came out.

…When Mr.Narayana Murthy’s PA informed me that I would only get 25 minutes with him, I was dismayed. What would he be able to tell me in that short time? Could he even get into the mood to talk? I needn’t have worried. His story was as simple as the man himself and the underlying thread that ran through the entire interview was Sharing. Though he found his life’s mission only after his post-graduation, the seeds had already been sown in his childhood by the culture of sharing practised by his parents. And oh, he got up precisely at the end of 25 minutes, without once glancing at the clock, making me wonder if he had an inbuilt body clock!

….It was a first of sorts.  I had to use email, when it had not yet become common (there was only the DOS based ones) to interview Vishwanathan Anand because he lived in Spain. I certainly couldn’t have afforded the ISD charges even if I could have contacted him! I first spoke to his parents in Chennai and then interviewed him over email and he responded so beautifully.

…I still remember the conversation I had with the sarod maestro Ustad Amjad Ali Khan. He could recall the pain of disappointing his father when he went to play football – he was forbidden from playing rough games for fear of injuring his delicate playing fingers. As it turned out, the escapade had resulted in his getting hurt when the boys had turned rowdy on the field and beat him up in the fight.

…Meeting Mary Kom was a mind-blowing experience, about which I had written here.

It was enlightening and enriching to interact with each and I have tried capturing them to the best of my abilities in the two books Children who made it Big and When they were Children.

And just in case you are wondering about the name on the book covers, well, you can read all about how I became Zephyr here!

Like Loading...
Tags: Biographies, books, Children who made it Big, children’s books, National Book Trust, NBT, publishing, When they were Children
Follow The Cybernag on WordPress.com