My beauty routine had(s) always been a good wash with soap and water and some ‘vanishing cream’, which was a sort of  moisturizer available in my younger years. I never bothered to look in the mirror even to check if the bindi was crooked. Then one day fate intervened and I decided to go to a beauty parlour for a facial and I was scar(r)ed for life.

The first part was enjoyable,  with generous amounts of cream slathered on my face and massaged gently into the skin — till she began pinching and pummeling and then slapping my cheeks, ostensibly to stimulate the circulation! If I thought the ordeal was over, I was mistaken.

Next, I was asked to sit at a table where a contraption was bubbling with hot water with my head under a thick towel. Soon my nose, and eyes began watering and I felt my face slowly getting boiled. When I emerged out of the towel, my face looked like a boiled lobster. A dash of salt and pepper and viola! I would have been a fit dish for a cannibal! I was immensely drowsy and all I wanted to do was to lie down and go to sleep. But did I have any luck? Nah!

She produced an instrument and attacked the black-heads on my nose with a vengeance. I could see the disgust on her face at this specimen. I kept dozing off but was rudely awakened by the sharp instrument digging into the boiled flesh.

Then came the threading session and after she was through, I felt like a boiled lobster and a plucked chicken rolled into one! I paid a hefty amount to the girl for torturing me for more than an hour and beat a hasty retreat.

Soap, water and ‘vanishing’ cream were more than enough for me, thank you and if I had a ‘black nose’, in the bargain, so be it!

I have always been baffled by the cruelty associated with beauty, even if it is a simple facial.  But my ordeal is nothing compared to what some women and sometimes even men go through to appear beautiful.

Get a load of what people around the world do to be considered beautiful:

The Chinese bound the feet of their young girls, so tightly that the bones got crushed and healed themselves within the confined space. The resultant foot when the bandage was finally opened was not more than 4 or 4.5”, with 3” considered the ideal size of a foot! The girls grew into women who couldn’t walk properly and teetered on their tiny feet. It is beyond me how such misshapen feet could be deemed beautiful by any stretch of imagination and how such a barbaric custom thrived till the early 20th century?

Corsets worn by European women well into the 20th century, were a painful way of constricting the body into an hourglass shape and give them impossibly tiny waists, sometimes as tiny as 14”!

resemble shark’s teeth. The practice of lip-stretching to wear wooden and even clay plates in them as ornaments is considered to make a woman beautiful! Some of these plates are as large as six inches in diameter. When they are removed the lip hangs down.

Then there are the neck stretching rings worn by tribes in Africa as well as the Kayan Lahwi tribe in Burma. The latter are also known as giraffe neck women. The rings only create an illusion of a long neck as they push the collarbone downward. The practice starts as early as five years of age and some women can’t hold their necks up without the rings after they have worn them for several years and sometimes decades.

Scarification, the practice of making intricate scars on the skin is prevalent in many African tribes. It has cultural as well as aesthetic significance for them.

Body piercing and tattoo are also forms of painful procedures undertaken in search of beauty. 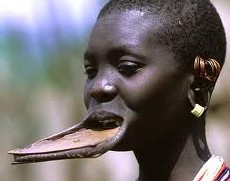 Today we have silicone and botox trying to make a woman ‘beautiful’. The other day I saw a crummy flat with a board proclaiming to offer ‘Botox beauty treatment.’ I shudder to think of the gullible young women who must be subjecting themselves to the dangerous procedures at the hands of quacks. Don’t they have any regulations for these places, I wonder.

The zero size and anorexic looks have taken beauty to dangerous health levels, not to speak of whitening creams and bleaches to lighten the skin. What a sad state of affairs!

Incidentally, body piercing has made a modern day comeback and so has scarification and of course we have the modern equivalent of foot binding in the pointed-heels and impossibly high stilettos. And while we can cite culture and ethnicity for the earlier practices, we have only vanity and insecurity to blame for the modern versions.

The quest for eternal youth and beauty is a source of unfailing amusement to me. When I watch ageing men and women trying to look young by dyeing their hair, their beards and even moustaches, while their wrinkles and sagging skin gives away their ages, I am tickled pink. I’m happy to look my age and had looked forward for years to get my first grey hair!

I was dismayed to find that most moisturizers come with an anti-wrinkle formula or skin lightening ingredients these days. The other day, I went through a whole lot of jars and tubes looking for a simple moisturizer. The baffled salesgirl could not fathom this crazy middle-aged woman who scorned the creams that promised a wrinkle-free youthful skin!

Not as baffled as my hair dresser who shakes her head at the profusion of white hair every time she gives me a trim. From cajoling to teasing to sarcasm, she has tried everything to make me change my mind about colouring my hair. ‘It will be so natural that even you will not notice it,’ she told me once.

‘But I am happy with my white hair,’ I remonstrated. Growing old gracefully is something I believe in.

Can we honestly say that the carefully ‘prepared’ beauties of the beauty pageants are really beautiful? I can’t be but look at them with skepticism wondering which part of their face was altered and which has got a shot of Botox. Compare them with women of the earlier generations who were naturally beautiful despite some having large noses or wide mouths, even crossed-eyes!

To be beautiful one doesn’t have to inflict pain on oneself or spend mega bucks at the parlours and health spas. Just be unselfconscious about your looks, and be happy. If not happy, at least carry a smile around. I have a dear friend who has a smile on her face no matter what she is going through and she is one of the most beautiful women I know. 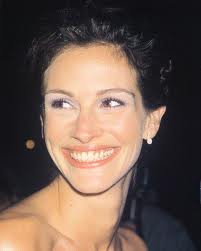 A smile is an ornament

In Tamil we call a smile punnagai. Nagai means both a smile and an ornament. So if one wears a smile, one is automatically wearing an item of jewelleryl!  Where is the need to subject your body to all kinds of pain to achieve some elusive parameter of beauty, when you can be beautiful most effortlessly? A smile invariably draws the onlooker’s eyes to it. And if the eyes smile along, it is icing on top of the cake.

I have a soft corner for all those bloggers on my comment page who sport a smile – the wider, the more beautiful!

Finally, as long as those who love you think you are beautiful, you ARE.

Some years ago, I was agonizing about my misshapen face, with a tumour near my left ear and one eye diverging horribly due to loss of vision, when the L&M said most matter-of-factly: ‘No matter how you look, you will always be beautiful to me and the children.’ The operation on the tumour left a scar but whenever that, or my eye bother me, I remember his words and feel beautiful again.

Beauty with cruelty has always held a morbid fascination for me and so I thought  of sharing it as part of  the Yahoo-Dove Real Beauty contest on Indiblogger.

← Who needs any other sport?
Cash for crap →